I honestly tried to talk Devin out of this location. The tour book descriptions of Mostar weren’t turning me on. It sounded like the only attraction was an old bridge. (Mostar literally means “old bridge.”)

I was loving Croatia and Montenegro so much, and I wanted to spend more time in those countries. But I’m a yes girl whenever Devin says, “Let’s go,” so I agreed to go… for a day.

By the time we got to Mostar I was ready to murder Devin. I settled for yelling at him, instead.

This is a real dilemna: knowing you’re getting married in a day, but you really want to throw a tantrum and let your guy have it.

I knew we’d have to make up. I had to be willing to listen to his experience, too, and work through our stuff. (These multiple marriages were coming in handy!)

Once we were friends again, we went out to explore Old Town Mostar, and it was MAGICAL! 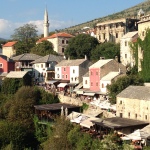 View from the Old Bridge 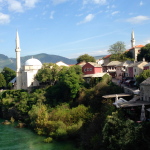 View of Mosque from bridge 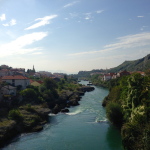 Another view from bridge 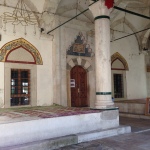 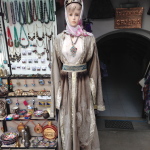 The world-famous Old Bridge is an architectural wonder by the same architect who created the Blue Mosque in Istanbul. What I found was warmth, kindness, and enthusiasm for western tourists.  Our tour guide learned English from watching episodes of “How I Met Your Mother.” The sweet young women at Motell Denny surprised us with a bottle of champagne, chocolates and towel swans on our bed.  We made friends with a Bosnian couple in nearby Blagaj, and spoke all night about wedding vows and how to appreciate our partners.

Mostar also has a rocking restaurant (recommended by the staff at Motell Denny) that was crawling with friendly cats and kittens. (Yes, I’m a cat person.)

It was all so lovely and walk-able that I didn’t want to leave. I started fantasizing about permanently relocating to our 2-bedroom penthouse suite with the fantasy kitchen, Jacuzzi tub, and panoramic view of the city. So we stayed an extra day. 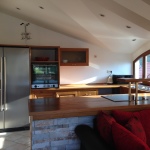 The kitchen of my dreams! 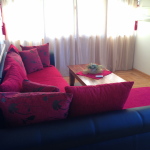 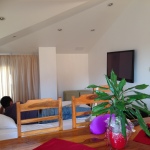 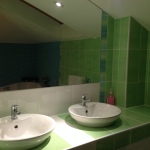 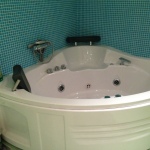 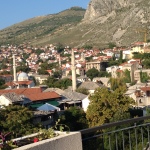 View from our patio

Getting Married in Mostar

Take at what Mia and Selma (at the front desk) created for us when they heard my husband and I were in town to get married: Devin and I decided to marry on Mostar’s older bridge just steps away from Motell Deny. There’s only one problem with getting married on a bridge: lots of foot traffic and interruptions!

We became the attraction for a never-ending stream of tourists crossing through our ceremony. Strangers started taking our pictures, commenting on the action.

Devin and I still had a great time, but you might want to nix the bridge if you’re only getting married once. At the same time, you’ll be hard-pressed to find a more charming, romantic, friendly and affordable location for your wedding and honeymoon than Old Town Mostar.